I’ve never been a very graceful person. As a little girl I had clunky red shoes that were meant to fix my pigeon toes. They weren’t very effective though because as soon as I was out of my mom’s sight, off they came! My knees were knobby and my balance only so-so. I always had bruises from walking into things and once I sprained my ankle just trying to kick a ball! I got used to it. Ironically, the name “Nancy” actually means “grace”! There were, however, two places growing up where I finally felt graceful. The secret, I discovered, was keeping  my feet off the ground…

The first place was in our pool or anywhere I could swim under water. I’d  zoom through the water doing front flips and back flips. I could twirl and do hand stands. Dad called me his little fish. I felt willowy and elegant and spent a lot of time pretending I was a mermaid princess. Of course, you know, that princesses are never, ever clumsy!

The other place was the one spot I thought I would never feel graceful. Gym class! Most of my grade school career had been spent trying to get out of gym class. I tended to catch balls with my face and when I ran, I tripped on nothing. Then in eighth grade we were introduced to gymnastics. Of course the floor routines (running and flipping) weren’t my thing and the balance beam was out for reasons that should be obvious but the uneven parallel bars….hmmm? They looked interesting! Hanging by my knees from the monkey bars was totally my thing and bar routines were kind of the same. 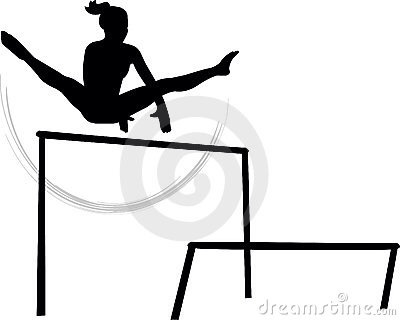 The teacher taught us some basic moves and we practiced for weeks. Eventually the whole class was ready to put on a gymnastics show for our parents. Guess who was picked to do a routine on the unevens? I  flipped from the bottom bar and swung around the top one. I put one leg over and did another flip. I flew back and forth between bars, up and over and back down. My mother said later that she was scared to death I was going to fall on my head but I was in heaven! I felt so graceful and athletic, something I never felt when I had both feet on the ground!

My gymnastic career ended with the semester. It’s just as well. I probably would have ended up hurting myself. The closest I get to feeling graceful these days is when I’m doing yoga. Years of practice has improved my balance and posture, (heck, I get crazy excited when I’m able to hold a pose on one foot!) but I’m still pretty clumsy. I don’t mind though because I figure I make up for it with small motor abilities. Drawing, painting, handwriting, Pick-Up-Sticks, Jenga, you name it. Plus I can untangle any knot you throw at me. It’s a fair trade. 😊

Mindful exploring, through the eyes of a viking daughter.