Lately I seem to have elephants on the brain. It’s not as uncomfortable as you might think. I like elephants. In fact I find them to be amazing, soulful creatures and, sure, I think about them now and then but I’m not usually pondering pachyderms quite as often as I have been over the past few weeks.

It all started a few weeks ago with Charlie at Doodlewash who created this cute little baby elephant . His handsome pachyderm (titled “Baby Elephant Walk”) reminded me of a really corny old film with Elizabeth Taylor called “Elephant Walk” in which an angry herd of elephants demolishes a house that an arrogant plantation owner builds right across the middle of the path they take to reach their water hole. Personally I think the elephants were more than justified. On an entirely unrelated note, Liz Taylor sported a pretty amazing wardrobe for a woman living in the middle of a jungle.

Anyway, back on topic…A few days later  while reading the local paper I came across an article about another elephant, this one is a bit of a local celebrity. Her name is Lucy and I thought since I seem to have elephants on the brain and since Lucy is by far my favorite elephant (sorry Charlie) that I should introduce her to all of you as well! 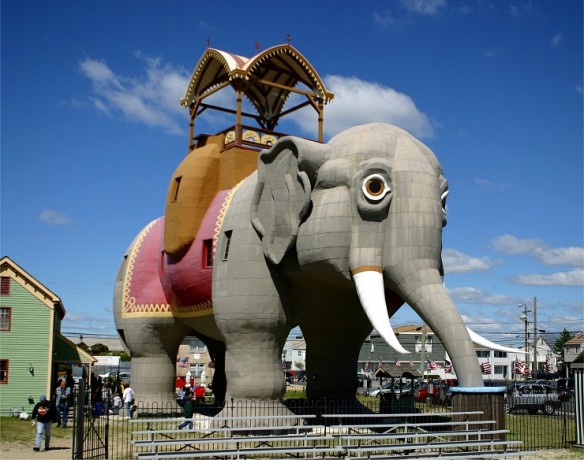 Lucy lives in Margate, NJ, Just west of Atlantic City. Here is a little background information about her and James Lafferty, the man behind the elephant!

“In 1881, the U.S. Patent Office granted (James) Lafferty a patent giving him the exclusive right to make, use or sell animal-shaped buildings for 17 years. Lafferty paid for the building of his first elephant-shaped building at South Atlantic City, now called Margate. He employed Philadelphia architect William Free to design the building and a Philadelphia contractor constructed the structure at a cost of $25,000 – 38,000. Originally named “Elephant Bazaar”, the building is 65 feet (19.7 m) high, 60 feet (18.3 m) long, and 18 feet (5.5 m) wide. It weighs about 90 tons, and is made of nearly one million pieces of wood. There are 22 windows and its construction required 200 kegs of nails, 4 tons of bolts and iron bars, and 12,000 square feet of tin to cover the outside. It is topped by a howdah carriage, also known as a hathi howdah.

Lafferty brought real estate customers up a narrow spiral staircase from within the elephant’s body to the howdah, where he could point out real estate parcels available for sale. Lucy’s head shape identifies the building as an Asian Elephant, and its tusks as a male. In its first few years, the elephant was referred to as a male, but today it is now generally considered to be female.

The structure was sold to Anton Gertzen of Philadelphia in 1887 and remained in the Gertzen family until 1970. Sophia Gertzen, Anton’s daughter-in-law, reportedly dubbed the structure “Lucy the Elephant” in 1902″.    https://en.m.wikipedia.org/wiki/Lucy_the_Elephant 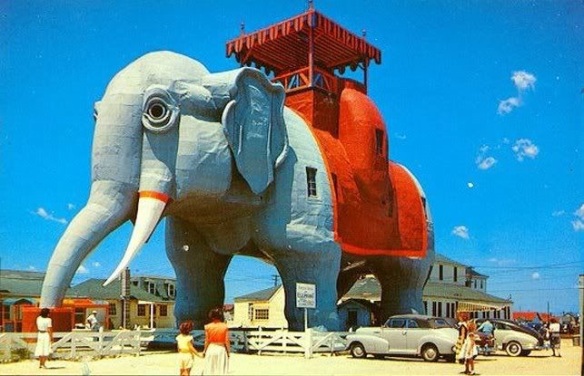 Over the years, Lucy has been a restaurant, business office, apartment and tavern. By 1969 she was really showing her age and the City had her scheduled for demolition but a group of locals (who apparently also had “elephants on the brain”) formed the “Save Lucy Committee” and raised enough money to have her moved to a bigger space closer to the ocean and to restore her to her original glory. Can you imagine watching a six story elephant being towed down the street?! That must have been a site to see!

There is a narrow spiral staircase built into Lucy’s rear leg that takes you up to the interior of this unique building where a large room with a vaulted ceiling is filled with memorabilia. A second spiral stairway leads up to the observation deck that affords wonderful views of the ocean and the New Jersey coast.

View from the howdah

I’ve  been to visit Lucy more times than I can count and so have my children. We always find it impossible to see her and not smile. I guess she is such a totally unexpected surprise…so unique!

Having elephants on the brain is a pretty cool thing after all!

Here is a really great website about Lucy in case you want to learn more: Lucytheelephant.org

This post has been added to the Leisure Link at Perspectives On. Hop on over to check out some other post about great leisure activities!

15 thoughts on “Elephants on the Brain”