If we were having coffee today you would find me lounging at the kitchen table still in my jammies, hair all askew and my coffee cup within reach. Hope you’re okay with that because I am now in full summer mode. For we school employees, that means that “run-around-and-get-all-your-errands-done-Sunday” becomes “stay-in-your-pajamas-and-have-some-more-coffee-Sunday,”

School officially ended on June 16th so it’s taken me a month to finally get to this point. For two weeks, at the end of June and the second week in July, I was preparing for and working at STEAM camp. Whew! What a lot of work, but it went really well and the kids had a great time. Here is Miss Dee and a “friend” modeling one of the photo boards I made…. 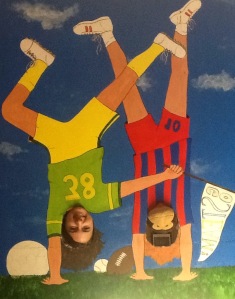 In between camp weeks, I was preparing and finishing up art work and projects for the second week and celebrating July fourth so now, this weekend is what feels like my first real weekend off. The first few days my brain was in relaxation heaven! Ahh!  Just not having anything nagging at the back of my brain was wonderful. Welcome to the mind of an obsessive, over thinker!

If we were (finally) having coffee this morning I would pour you a cup, offer a donut and ask, “How the heck have you been?” I would ask about books you might be reading, movies you might have seen and activities you might be involved in? I would also inquire about your work or projects and any challenges you might be having there or with life in general? I hope they are few and far between.

My last coffee share highlighted my first whirlwind week of summer break. That was fun, but crazy! My biggest highlight since then was this Wednesday night. Miss Dee and I went to see Ed Sheeran in concert! Her birthday (number 19) is tomorrow so the tickets were a present from her dad and I. The D-man was kind enough to act as our chauffeur since I don’t drive in the city (it’s better for everyone, believe me) but I got to enjoy the concert with her. What a great show! She has been a huge fan of  his for years but I was only familiar with a few of his songs. Now I’m a huge fan too. This was Miss Dee’s first ever concert and it couldn’t have been a better experience. She is not a big fan of crowds and noise but Ed seems to have a very eclectic fan base, both young and old, so we were surrounded by a pretty tame crowd and since it is only him and his guitar on stage, the noise level wasn’t the same as most other concerts I’ve attended! We really had a blast dancing and singing along and I’m so glad she chose to share this memory with me!

In other news, Mr D was down for the count with strep throat last week. His temp reached 103! I know it’s just the bodies way of getting rid of an infection, but high temperatures  freak me out! He missed almost a full week of work and spent most of his time curled up on the couch while I tried to force food and juice on him! Even at 21 years old, he is still my baby when he gets sick! Thankfully, he is back to normal and actually just got home from the beach himself last night.

He and Miss Dee are enjoying having all their friends home on college break. I love having the crowd back around too (except when they come and go in the wee hours and hubby and I are trying to sleep)!

Okay, If we were having coffee, I would probably feel the need to get on with my day by now. The first few weeks of summer have been too crazy to even bother looking at my Bucket List, all though I’ve checked off a few things without even trying. So maybe I’ll take a look at that today….or tomorrow. Mostly I guess, I should put on some clothes, brush my teeth and try to be productive!

Thanks so much for stopping by. Hope your weeks is awesome! Don’t forget to visit either  Nerd in the Brain or Part Time Monster (the ladies are co-hosting this week) so you can check out the rest of the Coffee Share Posts!