In my recipe binder, along with all the recipes I’ve cut from magazines and collected from friends, is a tattered little chunk of green cardboard. It was cut from the side of a box and even though the recipe is a simple one..1 cup butter or margarine; 1 cup sugar; 1 1/2 teaspoon vanilla; 2 eggs; 3 cups sifted flour; 1 1/4 teaspoon salt…it’s the most special recipe I own.

Let me tell you why. 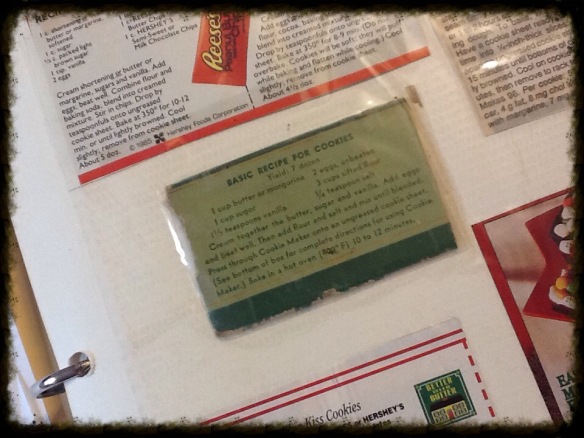 When I was a little girl I rarely spent time cooking with my mom. It just wasn’t her thing. Not that she wasn’t able to make good food, it just wasn’t something she really enjoyed doing. I don’t remember her collecting recipes or having a ‘famous’ dish or spending hours making anything by scratch. Dinners were hearty but basic and her only baking, for the most part, were several batches of cookies for the holidays. Those were the rare occasions when we cooked together.

We always made pressed butter cookies.  I’m not sure why that was the cookie of choice. My father’s mother, a world class baker, was from Germany and these were very much like German spritz cookies so they may have been his request. The recipe we used for our cookies, was the one that was printed on the side of the box that the metal cookie press had come in.

My job, at first was to turn the handle on the sifter and slowly add the flour as my mother stirred. Then, after the batter was ready, she filled the press. I would pick out which shape to make first (usually the flower) and she would fasten that to one end, and the plunger to the other. Face down on the cookie sheet, she pressed row after row till the press was empty. Finally, we used red and gree sprinkles to decorat the top.

Once the first batch was in the oven, we started on the second, sometimes adding red or green food coloring to the dough to make it more festive. Soon the house was filled with the aroma of cookies that smelled just like Christmas to me! 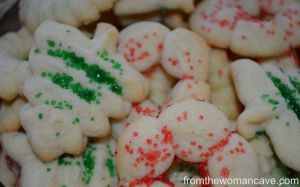 As I got older, we would take turns doing the mixing and pressing. Even after I moved out on my own, I still came over to my parents house the week before Christmas for our cookie baking party. Sometimes, my sisters would join us as well. Then, one  December, the tired old cookie press finally gave out. One of the metal fasteners that held the plunger on snapped off. Even my dad, who could fix just about anything, couldn’t repair it. Reluctant to just throw it away, mom packed it in the box and put it back up in the cabinet.

The next year, I purchased a battery operated cookie press that was faster and easier to clean. We used it for many years after that. It worked fine but it felt different, and even though the cookies looked the same, I would swear they didn’t taste quite the same.

My dad passed away in 1984 and a few years later, Mom decided to sell the house and buy a small condo.As we were cleaning out the kitchen cabinets I found the old green box with the broken cookie press up in the cabinet where she had put it years before.

“I guess we should just toss it.” Mom said, resigned down sizing. There were so many childhood memories attached to the press that it was hard to just throw it away, so even though I had memorized it years before, I used her scissors to cut the recipe off the side of the box and tucked it in my pocketbook.

Now, every year, Miss Dee and I make pressed butter cookies. I mix the ingredients,  she picks the shape (usually the flower) and puts on the sprinkles, We still use the battery operated cookie press and even though I already know the recipe, we still pull out the page from the binder with the tattered piece of green cardboard. It reminds me of when I was little, baking with my Mom. I feel blessed to be able to carry on the tradition with my daughter.