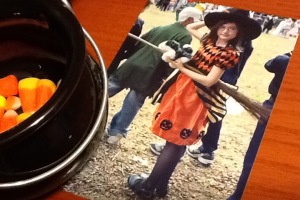 Not surprisingly, the most popular topic in the lunchroom this week has been Halloween costumes. It’s always fun to hear the students describe what they’re  going to be and all the treats they plan on collecting. They’ve been thinking and planning for months and I just know there are a bunch of frantic parents out there rushing around trying to find a “Ladybug Princess”  or  “Zombie Hunter” costume in the right size.

Thanks to pop-up costume super stores and online web sites, Halloween has become a big, expensive deal. I’ve been there too. Most years my kids wanted store bought costumes but I’ve also made a few by hand. I can’t sew to save my life but give me some felt and a hot glue gun and watch out!! And you know what? Even though they were a lot more work, those costumes were my favorite.

Growing up, we almost always made our costumes by hand..and when I say “we” I mean my mom. She was queen of the last minute Halloween costume. There were no weeks of planning ahead and most times final touches were being added as you were heading out the door! We had a huge cardboard box in the attic filled with Halloween type odds and ends, old hats or neckties, pieces of former costumes, masks, wigs, you name it. A day or two before Halloween we would drag down the box and start sorting through. The big difference between us and the kids today is we didn’t have any plan about what we wanted to be ahead of time. Mom just pulled stuff out of that magic box and then tried to figure out what costume could be made with it.

Being the baby of the family by quite a few years, I missed out on a lot of my moms earliest costume triumphs and my oldest sister, Linda hated dressing up She stopped trick-or-treating when she was about 12. But my sister Pat and brother Jim (the middle children) were very adventurous and were willing to wear any outfit they thought would win them first prize at the local Halloween party and score them the most candy when they went door to door.

I’ve heard many stories about some of mom’s most clever creations.

There was that year that she took an old house dress, cut it in half and sewed it to half of one of dad’s old dress shirts and a half pair of pants. Then she took a mans hat, decorated half of it with ribbons and flowers and glued part of a long blond wig to that side. Then she put makeup on half of Jim’s face, drew a beard and mustache on the other half, put him in the sewed together clothes and ta-da! Half-man/half-woman.

Or there was the year that she cut up an old sheet and made Pat into a mummy. She wrapped and wrapped till all but the eyes and nose were covered. After adding some blood colored  paint to make it more scary she sent her out to trick-or-treat. The only flaw was that she came undone periodically and the neighbor’s had to keep re-wrapping  her!

My favorite was the year she found an old worn summer blanket with a southwestern print hiding at the bottom of the box. She borrowed three long sticks my dad had in the shed, probably left over from some project, and tied top ends together. Then she attached the blanket over the sticks. The result was a four foot Native American teepee! After adding a slit for a door and another for looking through, Jim climbed inside and just carried it around. When he got tired he sat down inside! He won first prize at the party that year!

By the time I was old enough to partake in the Halloween festivities my brother and sisters were well into their teenage years and mostly through with that stuff. The costume box still lived in the attic and mom made me one or two thing but she said I always wanted to be “something pretty, like a princess or and angel” so she usually ended up buying me one of those kids costumes that came in boxes with a cellophane window on top.  Anybody remember them? They were one piece polyester suits with ties in the back and they came with a plastic mask held on by an  elastic band that usually broke before you reached the third house!

I’m feeling pretty nostalgic about all this Halloween stuff. Too bad there is no one in this house trick-or-treating this year. Maybe I can dress up the cats?

This post has been added to the Leisure Link at Perspectives On. Stop over and check out the other leisure posts!

23 thoughts on “Gettin’ Our Halloween On…”